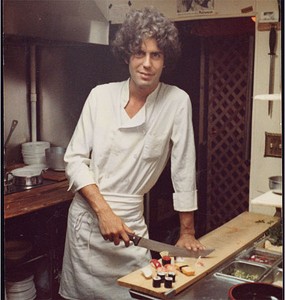 This one stings. Today and in coming days we’ll be hearing a lot of descriptions for Anthony Bourdain: celebrity chef, TV host, travel guide…but to me he’ll always be remembered as an extraordinarily gifted writer.

Not sure how Bourdain preferred to think of himself—the tragic fact he took his own life hints at some conflicts that weren’t readily apparent to the world. But I do recall hearing him laugh once when someone called him a celebrity chef. He said something about not having worked as a chef in a while. “But when I was, I was a working chef. There’s a big difference.”

He could be caustic, critical, devastatingly witty…and also sensitive, charming, and always blindingly intelligent and insightful. But now it’s clear these were public faces—the private might have been very dark, very different. We just don’t know.

We know only that he leaves behind a young daughter, who must be broken by this. We know that his good friend Eric Ripert found his body, and will surely be haunted by that for life.

We know this truth: suicide is a permanent solution to temporary problems. We know it leaves behind grief and anger, confusion and havoc.

I don’t want to judge Anthony Bourdain, because I don’t know what brought him to that terminal place. I want to remember him as a storyteller, as one of the most interesting people who lived in these very interesting times.

Everything’s a little darker this morning, and it’ll probably stay that way unless and until this makes some kind of sense. I suppose all we can do is hope he’s found the peace he felt was lacking.

Doesn't know much about culture, but knows when it's going to hell in a handbasket.
View all posts by editor, facilitator, decider →
This entry was posted in New Post and tagged Anthony Bourdain, RIP. Bookmark the permalink.