A symphony for the people

I’ve boasted more than once about the state of the arts in my beloved hometown. We’re at the resilient epicenter of a rust-belt renaissance, and we take our public arts very seriously. Not to put too fine a point on it, but this burg loves to put on a show, and its citizens love to come out for it.

So come out we did, the fam and I and a couple hundred kindred, on Sunday evening to enjoy the Akron Symphony performing for us first under a perfect summer evening sky and then finally, poetically, under the stars.

I can’t quite express for you how much this 90-minute fanfare meant to me, or how much I treasured it—mostly because I lack the 75 or so strings, woodwinds, brass and the rest to recreate for you just what I experienced. The program was as eclectic as you could ask for: orchestral classics like the overture from The Barber of Seville, and Gounod’s Funeral March of the Marionette (cast your mind back and remember the opening 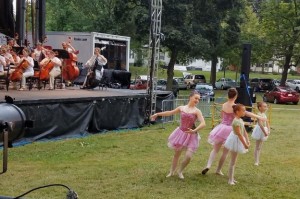 theme of Alfred Hitchcock Presents). There was true Americana from Sousa, Gershwin, and Bernstein. And there were surprises—dancers on, below, and about the stage, and some familiar film-score selections, like West Side Story, Vertigo, and even Star Wars.

What that all added up to was a certain, perhaps unexpected, informality. There’s nothing stuffy or pretentious about music in the park, and that means it and everyone involved is relaxed and relatable.

One of the most charming examples of this was the children’s music instructor stationed near the base of the stage. Early on our conductor, Eric Benjamin, invited the cohort of “mini maestros” to come down for a lesson in waving the baton. On the first pass, the symphony started up just a tad too early. “Hey, stop,” the instructor shouted. “The kids aren’t ready.” The orchestra gamely halted, waited, and began playing again only when the children prompted them to do so.

The conducting lesson also led to one of the most unexpectedly thrilling parts of the evening for me. I was admittedly a bit jealous that I couldn’t wave my own baton, but I nonetheless led my daughter down into the tutelage environs so she could give it a go…and thereby found myself closer to an orchestra-in-action than I’d 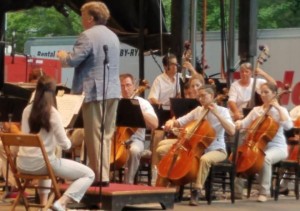 ever been, closer than I’d ever thought I could be.

It became then a full-sensory experience, one I’ll never forget. It became an encompassing onslaught; I could feel the music. It was a sort of forced synesthesia, and not at all in a bad way. Notes and measures and bars gained mass and density, right there in front of me.

I rode that out for a few numbers, and that was long enough for me to get a grip on my rhapsody, to begin paying attention, and to even snap a few pics. One thing I noticed then, that I hadn’t been able to see from further up the lawn, was just how contented the musicians appeared. Most were smiling, and all of them were displaying this sense of repose that can’t be faked, that can only come from someone in the throes of doing exactly the thing they live and love to do.

We, that lucky audience, were invited and encouraged to take pictures (no rude flashes though, please), but we were adjured from all types of recordings. I’ll admit I found myself tempted to flout that, if only to share with you some pale representation of what I saw and heard and felt. In the end I opted to do as asked, reckoning that they’d given so much I’d be a true chancre to do otherwise. I have since confirmed that the Akron Symphony has a YouTube channel, and I’d accordingly direct you there. I’ve also embedded their preview of the upcoming season below.

But in recognition of the facts that my words can’t do them justice and compressed video format can only one-up me around the margins, I’ll offer the most obvious advice, advice I’m sure comes through by way of my enthusiasm: Go see them for yourself!

Doesn't know much about culture, but knows when it's going to hell in a handbasket.
View all posts by editor, facilitator, decider →
This entry was posted in New Post and tagged Akron Symphony, Art, culture, music, performing arts. Bookmark the permalink.