They stole the crown jewels! (This is not a metaphor) 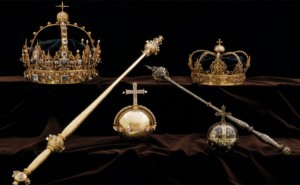 Here’s an obligatory disclaimer: thievery is bad, mmkay? And we endeavor not to encourage or glorify roguish behavior in any form. Even if it’s in really, really badass form.

On July 30th a pair of pilferers pulled off a daring daylight heist, in the form of a smash-and-grab in the Strängnäs Cathedral, near Stockholm, erstwhile home of the Swedish crown jewels. They seized two crowns and a golden orb, all dating from the 17th century, then made good their escape.

And oh what an escape. They pedaled away from the cathedral on bicycles, then transferred their loot onto a motorboat (possibly jet skis; accounts vary) and disappeared somewhere on the area’s sprawling network of lakes and waterways. They remain at large.

We repeat: thievery is bad. By the transitive property of criminal law, thieves are also bad. We condemn them.

But they stole the crown jewels, and escaped on bicycles and boats. Damn.

Doesn't know much about culture, but knows when it's going to hell in a handbasket.
View all posts by editor, facilitator, decider →
This entry was posted in New Post and tagged art theft, Strängnäs Cathedral, Sweden, Swedish crown jewels. Bookmark the permalink.