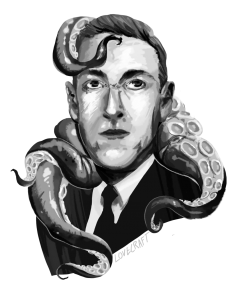 Howard Phillips Lovecraft would have turned 128 this week. As it was, he died in 1937, aged just 46, but if he’d enjoyed such startling longevity we likely wouldn’t be discussing today what infernal bargain was keeping him alive, but rather if age, perspective, and modernity had made him any less deplorable.

H.P. Lovecraft is rightly recognized as the father of ‘cosmic horror,’ and a strong cornerstone of the entirety of the horror genre as we know it today. Giants like Stephen King, Clive Barker, and Neil Gaiman cite his influences, and his Cthulhu Cycle continues to slo-mo morph right before our eyes, from a cracking good monster story into a modern-day mythos.

But here’s the thing. H.P. Lovecraft was an out-and-out, wholly committed racist. His racism, anti-semitism, misogyny, and bigotry were, from all evidence, core facets of his character.

So the question becomes, can you separate that from his writing? It’d probably be a cop-out to say this is an individual choice (even though it almost always is). And it can’t be denied that some of his stories (none worth naming here) were blatantly and explicitly bigoted—there shouldn’t be much argument in shunning those works wholesale.

But the others? The majority of his corpus doesn’t seem to advertise his prejudices, although the cynical might presume that as long as the protagonist was WASP-y and male, all was right in Lovecraft’s world, and he could bring on whatever was eldritch and wrong with that world.

Elsewhere in this space I’ve discussed similar, dreadful failings in another American author, Ernest Hemingway. Hemingway, too, brought his personal prejudices into his writing—again, not all his writings, but enough to make his readers all too aware of who and what he was.

And I like Hemingway—I like him a lot. I read and re-read A Farewell to Arms, For Whom the Bell Tolls, The Dangerous Summer, and many others, usually several times per year. But on the other hand, I read The Sun Also Rises and To Have and Have Not each only once. The gratuitous racism in each, frankly, turned me off and I’ve never wanted to read those books again.

The way I’ve compartmentalized that—which mirrors, probably, the way I’m compartmentalizing Lovecraft—is either a defense mechanism or an apology for men who neither asked for nor earned one. But it’s where I’ve landed on this issue.

As with the work of Ernest Hemingway, I’ll probably continue to enjoy the Lovecraft stories I like, while shunning the ones I find objectionable. And I’ll advocate for historical honesty: we should remember these authors as they were, warts and all.

Along the way I’ll honor and support anyone compelled to take it further. If you want to burn Lovecraft in effigy I won’t light your torch but I won’t douse it either.

Doesn't know much about culture, but knows when it's going to hell in a handbasket.
View all posts by editor, facilitator, decider →
This entry was posted in New Post and tagged cthulhu, Ernest Hemingway, H.P. Lovecraft, literature, prejudice, writing. Bookmark the permalink.