I tumbl for you 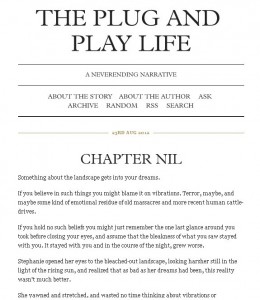 There just might be something unforgivably self-referential in using one blog to plug another. But anyway, here we go.

Tumblr is an exponentially growing “micro blog” platform. Twitter, with its 140 teensy characters, has stolen and muddied that “micro” designation, but with Tumblr it means something different entirely. The size of the post, or the presentation, isn’t what’s micro — it’s the effort required to get it there. You can create a Tumblr on the fly, in seconds. You can update it even easier, with one hand, while the other fences with ninjas. It’s that easy.

With that in mind, I reckoned Tumblr was perfect for trying out a concept I’ve been mulling over for ages. Thus is born The Plug and Play Life.

It melds two things which tickle the cockles of the marrow of my fancy: long-form narrative, and the web log format. But these two things aren’t exactly chocolate and peanut butter. There’s a fundamental disconnect between them. A web log — a blog, to ye cognoscenti – has a last in, first displayed chronology. That’s pretty much the exact opposite of a running narrative.

I devised a solution by abating the importance of the narrative arc, in favor of the immediacy of the present episode, or post. This is all explained in a bit more detail in the ‘About the story‘ page, but hopefully it’s intuitively clear when you jump in and start reading (or viewing. This will be a graphic medium as well).

But I overexplain. So here’s the summary: it’s a neverending story. It’s about disorientation. Feel free to jump in anywhere.

The Plug and Play Life. A post-modern way to storytell? Or maybe post-post-modern, or post modern modern? Let’s not ruin it with labels, let’s just see how it unfolds.

Doesn't know much about culture, but knows when it's going to hell in a handbasket.
View all posts by editor, facilitator, decider →
This entry was posted in New Post and tagged blog, storytelling, The Plug and Play Life, Tumblr. Bookmark the permalink.

One Response to I tumbl for you