A new look at Mozart 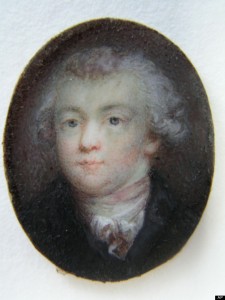 We learned this week that we have another look at the face of history’s most talented composer. This undated 18th-century portrait has been identified by Austrian researchers as one of just 14 known likenesses of Wolfgang Amadeus Mozart. This painting is unique among the Mozart portraiture in that he’s gazing directly ahead, and he’s not wearing his emblematic powdered wig.

Mozart’s story is at least as fascinating as his music. He was a child prodigy born into a world that had no understanding of such things. It was the Age of Enlightenment, but the emerging sciences couldn’t explain a toddler with perfect pitch, a child with seemingly limitless musical talent, and a young man who was effortlessly becoming a composer unlike any yet seen. Only the largess of heaven could explain his gifts, in the minds of most of his contemporaries. And when Mozart revealed his very human flaws, those contemporaries saw this as an insult to Providence, an abuse of the talents that didn’t truly belong to him. With Mozart the combination of genius and weakness earned him contempt. One suspects he was aware of that, and one can imagine seeing the weight of that in his world-weary eyes, in this newly identified portrait.

Wolfgang Amadeus Mozart died when he was just 35. He left behind not just an immortal body of work, but also an enduring warning about the relationship of society with its geniuses. We still vilify and misuse our geniuses all too often…but since the age of Mozart we’ve learned something about the cost of that. We’ve learned what we’re likely to lose when we hound them to an early grave.

Something about that warning becomes more real, more tangible, when you look directly into Mozart’s eyes. You can see that he knew it too.

Doesn't know much about culture, but knows when it's going to hell in a handbasket.
View all posts by editor, facilitator, decider →
This entry was posted in New Post and tagged Amadeus Mozart, classical composers, culture, enlightenment, music, what is culture?. Bookmark the permalink.